Tattooing in Ancient and Tribal Culture

The most ancient and widely employed form of permanent body alteration is tattooing. Archeological eVidence indicates that tattooing was probably practiced among peoples living during the late Stone Age. Carved figures from European sites dated 6,000 years B.C. and Egyptian figurines created some 2,000 years later show facial and body markings thought to represent tattoos. Proof of the antiquity of the practice is derived from the mummified body of a priestess of Hathor (dated 2.000 B.C.) that bears parallel line markings on the stomach thought to have had medicinal or fertility functions. 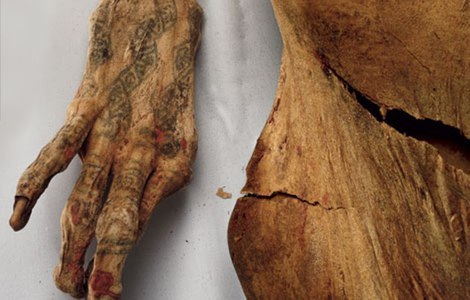 Tattooing in ancient Egypt was confined to women. especially concubines, dancers. and priestesses. Mummified remains bear series of dots and geometric line patterns. Singers and other female entertainers were decorated with the symbol of the goddess Bes. the protectress of women in these roles.

In 1948 archeologists working at Pazyrykin in Siberia discovered a burial mound constructed by Sythian nomads in the fifth century B.C. A number human remains were found encased by ice, some of which bore intricate black line markings on the arms. legs, and torso. The tattoos were sophisticated animal cats. goats. probably held totemic significance.

As early as 2,000 B.C. tattooing spread from the Mideast to the Pacific Islands by way of India, China. and Japan. Theories of how the diffusion of tattooing into Pacific 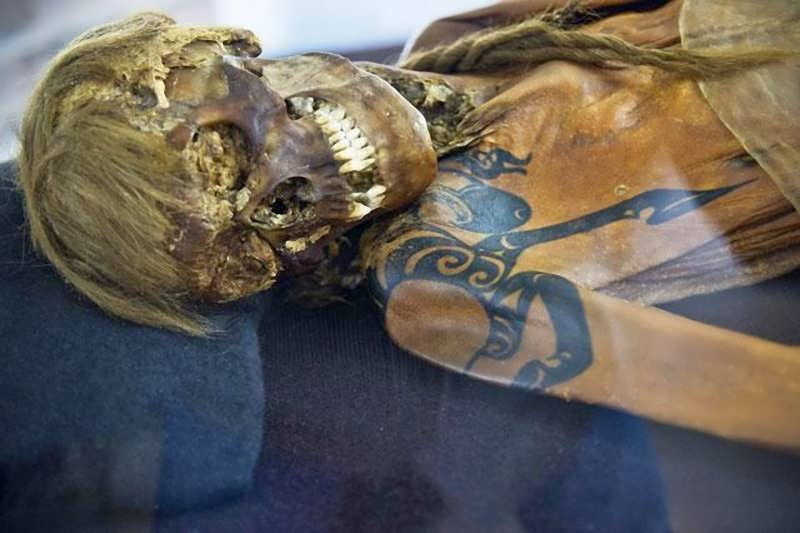 Island cultures took place vary. It is most probable that the practice was carried by the Ainu. a nomadic caucasian group that now inhabits the northern island of Japan. Samoan explorers may have adopted tattooing after encountering it in their western travels. and introduced it into Fiji, Australia, New Zealand, and the Hawaiian Islands. An alternative explanation of the diffusion holds that the practice was carried to Polynesia and New Zealand by South American explorers in their western travels. It is certain that tattooing was a feature of Aztec. Inca. and Mayan culture.

Extensively tattooed mummified remains dating from the first century A.D. have been found in Peruvian excavations. Whatever its route of diffusion. tattooing decorative form by 1,000 B.C. Arguably. the most sophisticated. decorative. tattooing in tribal societies was (and, to a limited degree, still is) practiced by the Maoris of New Zealand. Both males and females were tattooed, but with different designs and in different degrees.

Maori women usually received limited moko markings on the lip and chin area. while men carried extensive facial and body tattoos consisting primarily of whorls, geometric patterns. and other ornamental designs. The designs were so individual that, following contact with Europeans, they were often used by members of the nobility as signatures on legal documents (see Simmons, 1986).

Moko designs were inscribed with a serrated bone or shell adze dipped in pigment made from the oily smoke of burning nut kernels. The design was literally chiseled of an inch into the skin as the adze was struck with a mallet. The moko process was extremely painful and surrounded by extensive ritual. The recipient's social contact was severely limited and he or she was forbidden to touch food or items used for food preparation during the course of the process, which commonly lasted several days. Typically, one side of a man's face was decorated when he was young and completed a number of years later. Considerable status was attached to those who were most heavily tattooed. Maori males routinely used mussel shells to shave and tweeze facial hair in order not to cover the moko deSigns. The tattooed heads («pakipaki») of enemies killed in battle were removed, preserved, and proudly displayed by victorious warriors. while heads that did not carry moko were rudely discarded as «papateas» ones».

The dominant function of tattooing in all tribal societies was to denote the bearer's status or social identity. Commonly, the painful tattoo process was part of the rite of passage to adult status. By stoically undergoing the tattoo ritual, recipients could demonstrate their bravery to the other members of the group. In Borneo. Kayan women were given ornate leg and arm tattoos often depicting traditional, stylized dog designs. Covering the arm below the elbow was particularly important since an undecorated arm was seen as a sign of indiVidual was unable to endure pain. Among the Shan of the Society Islands, untattooed young men were regarded as immature since they did not yet have the courage to withstand the painful process. Tattooists encouraged the young recipient to be brave with the admonition, «If you wriggle too much people will think you are only a little boy»

Tattooing typically also had religious or magical purposes, often proViding a means of identification or protection in the afterlife. In Fiji, women who died without tattoos were believed to be beaten by spirits of other women and served as food for the gods. The spirits of women of Long Glat in Borneo were assigned tasks after death based on the extensiveness of their tattооing. The most heavily tattooed could gather pearls in the heavenly river, while those who died with partial decorations could watch, and those who were untattooed were excluded altogether. In addition to assuring immortality or improVing one's chances of enjoying a pleasant afterlife, tattооing in tribal cultures was often believed to insure the bearer's good luck; to help charm members of the opposite sex; to protect one from accident; to preserve youth; and to bring good health. 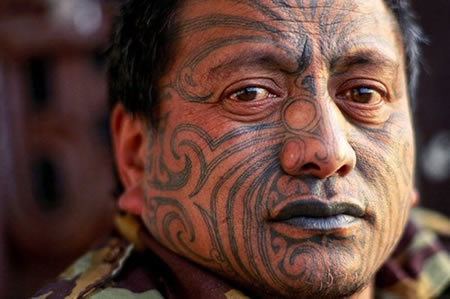 Women of nomadic tribes in Yemen and the Maghreb, for example. still practice facial and hand tattooing intended to have prophylactic or therapeutic functions. The markings protect the bearer from eye diseases, insure fertility, and bring good fortune. As a decorative art form. tattooing was, and continues to be. practiced most beautifully and with greatest skill in Japan. Clay figurines (haniwa) found in a grave mound near Osaka and dated from the fifth century B.C. show clear facial marks believed to be tattoos that performed decorative, religious. functions. This early form of tattooing appears to have died out by the fifth century A.D. The practice revived in thirteenth century Japan largely as a means of marking criminals and other social undeSirables. Criminals were tattooed with symbols indicating  the nature and geographic location of their crime.

Members of outcast hinin who were entertainers or dealt with criminals, and eta who slaughtered animals and tanned also marked with stigmatizing tattoos. By the early seventeenth century a form of tattooing called irebokuro (from «ire» meaning «to inject» and «bokuro» meaning «beauty spot») enjoyed wide popularity. tattooing demonstrated pledges of undying loyalty and love. It was common for people to have a loved one's name or a vow to Buddah inscribed on their skin. Irebokuro eventually died out as a decorative practice largely due to government suppression. century (during the Edo period) a Chinese novel called the SUikoden became immensely popular among Japanese from all social strata. The SUikoden told of the adventures of a band of 108 brigands who, like Robin Hood and his merry men, devoted themselves to fighting against the wealthy and corrupt government bureaucrats. 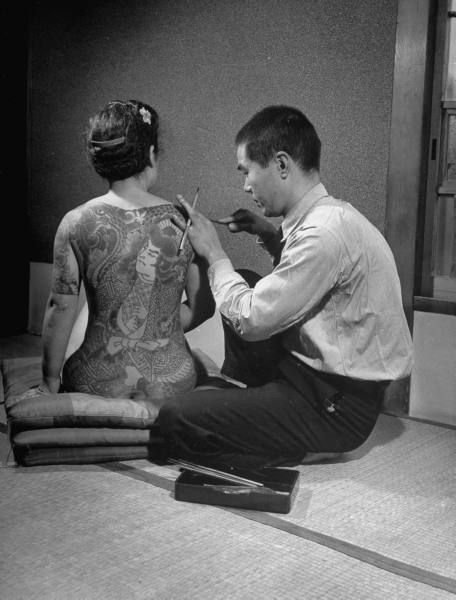 The most popular versions were heavily illustrated (wood block) prints by wellknown artists of the time, especially the famed Kuniyosh1. Some of the most popular outlaw characters, such as Shishin, man,» and Basho, who wore the image of a fierce tiger on his back, bore extensive tattoos. Soon Japanese from all walks of life were patronizing artists, who now specialized in tattооing, receiving ornate designs (now called irezumt) displaying heroic figures, gods, mythical creatures, and other traditional and popular images.

Irezumi flourished until century when it was forbidden by the Emperor Meiji; he saw it as an immoral practice and was concerned that newly admitted western visitors might see it as a sign of barbarism. However, westerners were fascinated by Japanese tattooing; skilled called hori after the word meaning the bodies of European and American sailors, merchants, and visiting dignitaries.

It is in Japan tattooing developed to its most ornate, complex, and colorful. Although it fell into official disfavor and is currently a stigmatized practice, the art of the Japanese hori is still practiced and a sizeable and active tattoo subculture flourishes. In addition to its importance as a traditional art form, Japanese tattooing is a significant modern phenomenon because of its major impact on the form and content of contemporary western body art.