Positive social responses from friends and other members of the novice tattooee's reference group also help decrease feelings of social risk, As described earlier. getting tattooed is a highly social experience for most tattoo recipients. Most initiates enter the studio in the company of close associates who act as «purchase pals» These companions help generally to reduce the risks involved by consulting with the tattooee about design and location. providing social support for the decision, commiserating during the painful application process. and by helping to fill waiting time. Purchase pals also aid the recipient by acting as surrogate social evaluators. They provide support by positively reacting to and thereby validating the tattoo consumer's decision. 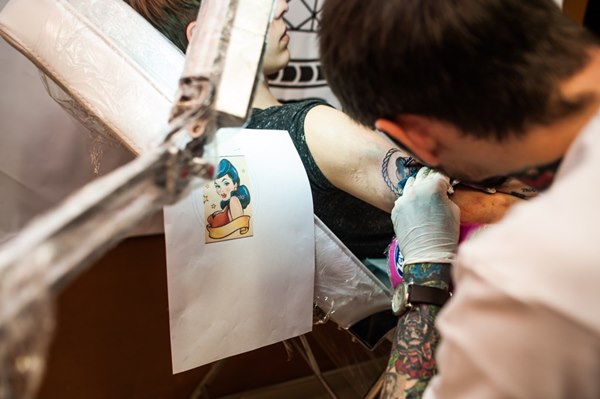 As a type of marginal service interaction the purchase of a tattoo entails conSiderable risk. Lack of familiarity with the purchase setting. anticipation of pain. uncertainty about social consequences. unanticipated expense. and other unknown factors lead the client to experience a high degree of risk.

The tattoo consumer uses a variety of strategies to help reduce his or her experience of risk in the tattoo encounter. In particular. the tattooee uses information provided by characteristics of the setting and the interaction within it to ease feelings of anxiety. The cleanliness and order of the studio, the quality and variety of the flash, the appearance and demeanor of fellow customers, and photos of past work are important sources of information. The customer's interaction with the tattooist is of particular importance, since this is the primary source of the information he or she uses to calculate trust.

The literature on patient satisfaction with medical service clearly shows that the client's evaluation of the service is, to a major extent, shaped by his or her interactional experience with and relationship to the service deliverer. The tattooee's experience of risk in the tattoo shop and satisfaction depend largely upon the psychosocial care provided by the tattooist. Interviewees consistently stated that those tattooists who were friendly, answered their questions patiently, allowed them to playa significant role in planning the tattoo, and behaved in what was often referred to as a «professional» style eased their anxieties and created a tattoo that was a significant source of pride. The key importance of the tattooist's demeanor is especially apparent in these descriptions prOVided by two women interviewees.

It is uncommon for tattooees to express dissatisfaction with being tattooed per se. Those that do tend to focus on the inferior craftsmanship of the service they receive. Concern with inferior quality is most commonly exhibited by more heavily tattooed people who have sufficient experience to evaluate the technical merits of their collection 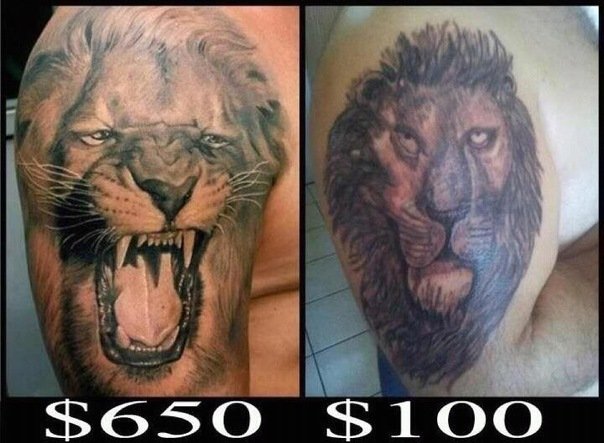 I want to get this (tattoo) altered more to my liking. I prefer that to getting it taken off. At first I was totally against it, but now it doesn't really bother me. To tell the truth, if I am going to have one, I want one that I really like and stick with that. I want this one redone because (the tattooist) that did it was absolutely hammered when he did it. I don't think it is centered right. The lines aren't right. You can see that some of it is more pointed where it should be rounded. It's not good enough. It isn't done by someone I would call an artist. His hands probably weren't that steady. I don't like the care and the workmanship that went into it. If I am going to be stuck with something, I want it to be something that I can be relatively proud of. I'm not proud of it now but I'm not resentful anymore.

I don't wish I didn't have any [tattoosl. Well. I do regret this [he indicates a crudely rendered flying money design). It just seems out of place with everything else…. I don't know why I got it.  did it when he first got here. You can see how bad his work was then. He scarred me up. I figured I would see what kind of work he did, so I picked something simple with only a few lines. I've been trying to find something for a year to cover it up, something that will go with the rest of my work.

As seen in the quotes above. regretful tattooees tend to feel personally responsible for the unsatisfactory quality of the work they have acquired. They blame themselves for choosing to patronize a particular studio or tattooist prior to searching out information. They also attribute their regret to having chosen the wrong body location or design. not communicating their desires more effectively to the artist. or not conSCientiously following the aftercare instructions provided by the tattooist. This attribution of dissatisfaction to errors of consumer choice encountered in tattoo recipients is a feature regret of service clients generally. This tendency to blame the self is understandable given the central importance interaction in service delivery and the relative lack of information carried by consumers of specialized services.

Due to the relative permanence of tattooing. there are only a limited number of options available to the dissatisfied tattoo consumer. If he or she is disappointed with the technical qUality of the work. the tattooee may return to the artist and request to have the piece relined or recolored. Most reputable commercial tattooists redo their own work free of additional charge. The most common option chosen by regretful one chosen by the interviewees quoted to have a «coverup» tattoo placed over the unsatisfactory image. In many tattoo establishments covering up or extensively reworking badly executed tattoos accounts for between 40 and 60 percent of the business. 5

Individuals who regret having chosen to get a tattoo have three major options. Most simply. they can conceal the offending tattoo with clothing makeup. Afar more extreme response is seen when dissatisfied tattooees attempt to remove the design themselves. 6 More commonly. extremely dissatisfied tattooees seek the services of a dermatologist or plastic surgeon. The major medical approaches to tattoo removal are dermabrasion. salabrasion. surgical excision. and vaporization of the tattoo pigments through the use of a ruby or carbon dioxide laser. Most of these techniques result in unsightly scarring. and even the more sophisticated and experimental laser removal cannot return the dermis to its pretattooed appearance and texture. 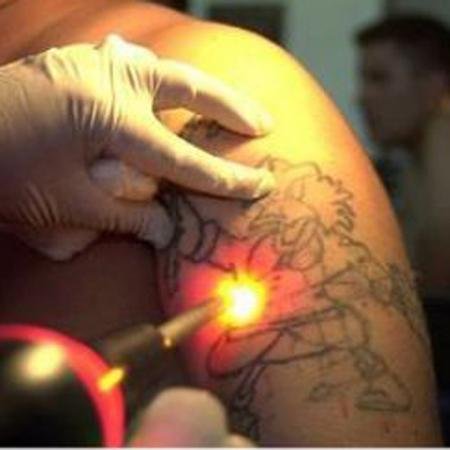 The regretful tattooee, having made a purchase decision that is practically irreversible, experiences a high level of cognitive dissonance. If the more extreme options presented above are not defined as Viable, the individual must find ways of readjusting his or her perceptions of the tattoo in order to regain some degree of psychological comfort. Typically, regretful tattooees reestablish consonance either by simply resigning themselves to the unsatisfactory tattoo (like one comes to accept an overlarge nose or a receded hairline), by seeking information that helps to disconfirm the negative evaluation, or by adjusting one's definition of the tattoo so as to see it as haVing positive attributes. The tattooee may seek out other tattooed people who can provide information that will support a definition of the tattoo as being of reasonable, if not outstanding, quality. The tattoo work carried by others provides a basis for direct comparison of technique and design. Since much commercial tattooing is of mediocre quality at best. it is likely that the dissatisfied tattooee will have little difficulty finding work that is inferior to his or her own. Alternatively, the regretful tattoo reCipient may readjust his or her perception of the meaning of the disvalued tattoo. While the work may not be entirely satisfactory technically or creatively, it can be seen as haVing other positive attributes. For example, when asked why she did not get a coverup over a crudely rendered «homemade» tattoo, one interviewee replied: