Tattooists, as we have seen, are drawn to the occupational activity by the independence, creativity, and income it offers. Depending upon the tattooist's orientation to tattooing, the occupational rewards of reliable income and creative opportunity are weighted differentially. Street tattooists define themselves as involved in a predominantly commercial enterprise that has the advantage of affording some degree of creativity. Fine art tattooists who specialize in custom designs emphasize the creative opportunities of the work but are also pleased that tattooing provides the financial security lacking in many artistic endeavors. One tattoo artist put it this way:

So tattooing suddenly appeared in my life and I realized that there was that opportunity to do that thing I always wanted to do so badly my entire life. That was to communicate on some indescribable level with each indiVidual person that carne through the door. At the same time I was making art and communicating, I was making a living…. Right from the first I deCided I really wanted to tattoo as an alternative art form. It really gave me a chance to explore a fresh new place. I still believe is the only visual art form available that is totally without pretension.

This artist touches on a feature of the tattooing occupation that was most commonly cited as the major ongoing reward by experienced tattooists. InteraCting with clients, ascertaining their needs, developing trust. fulfilling their desires, and vicariously feeling their pleasure were rewarding. The positive social experiences contained within the client relationship came to be defined as the dominant rewards of tattooing for a living.

As with all service occupations, the relationship with the client is of central importance in tattOOing. The client not only consumes the service/product, but also interacts with the service deliverer to shape and define the characteristics of the service outcome.

Consequently, interaction with clients is central to the tattooist's experience as we will see later, by his or her occupationTattooing is unique in that it is an arUcraft service in which the client is not only a member of the practitioner's «public,» but is also a central resource in another sense. The tattooee is, in essence, the tattooist's canvas. No other creative product involves the intimacy and indelibility of the tattoo. The tattooist creates an objecUservice that is a part of the client's «self» and his or her appreciation (or, in some cases, regret) is of paramount importance. Interviewees consistently expressed vicarious pleasure over the initial joy experienced by their creatively altered clients.

Let's assume the person is reasonably intelligent and isn't getting the tattoo just to prove a point. Let's assume it was done when the person was cold sober and that the person who was working on him is as interested in making art as he is interested in making a day's pay. The tattooist has worked with the individual to discuss the design, the placement, the color, and then the person gets the tattoo. The first effect is the person feels an incredible sense of accomplishment. I see it all the time. As soon as I finish a tattoo I send the person to the mirror. I don't look at the tattoo, I look at the guy's face. You see a smile break across the person's face. «Fuck it. I did it. I overcame my mother, my rabbi, my priest said. I'm happy. I did it.» The first experience is the exhilaration of having accomplished something.

Not all tattooees are joyful and appreciative. As discussed in the preceding chapter, regretful tattoo clients are dissatisfied with the technical quality of the work ancLbr the design chosen. Medical removal of tattoos is expensive, painful, and rarely results in an entirely satisfactory (that is, unscarred) outcome (see Goldstein et al., 1979). Other than simply learning to live with the unsatisfactory mark, the regretful tattooee has the alternative of having the piece covered up with another tattoo or redone by a (one hopes) more competent artisUcraftperson. Interviewees estimated that between forty and sixty percent of their work involved covering or redoing the tattoos of regretful tattooees. This was the work activity that the tattooists defined as most technically challenging and socially rewarding. In creatively altering or obliterating the offending mark the tattooist became the object of rewarding or she was responsible for renewing the client's positive experience of his or her physical self: 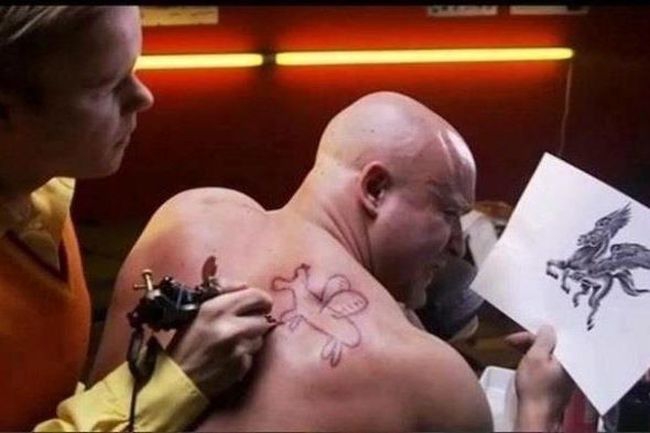 The best part of being a tattooist is when someone comes in with a tattoo that is less than nice and you can fix that up or do something with it to make them happy with what they've got. I like that part a lot. Reworking some old crude piece of trash tattoo that they have gotten somewhere along the line and making it into something as nice as you can. That makes them happy and it makes me feel as if I've really accomplished something as far as helping the person out. Plus, you get a moment's glory because that particular customer thinks you are really a tremendous tattooist because you have made a silk purse out of a sow's ear