RISK, REGRET, AND THE TATTOO CONSUMER

As we have seen, the person entering the tattoo setting commonly experiences considerable anxiety, especially since he or she typically has little or no prior experience with tattooing. The novice client possesses, at best, minimal knowledge of what the tattooing process entails. Due to the limited number of tattoo studios available in most areas, the potential client generally has little opportunity to compare prices and quality of work. However, the tattooee is usually intensely aware that the tattoo is a permanent addition to the body and that the application process involves some degree of pain. When asked to describe their state of mind when entering the tattoo establishment to receive their first tattoo, interviewees typically spoke of feeling nervous and fearful. Anticipation of «physiological risk» involving significant pain was the major source of their anxiety.

As indicated by this respondent, information provided by one's everyday associates usually increases the novice tattooee's anxiety rather than reducing it. The most effective means by which recipients eased their 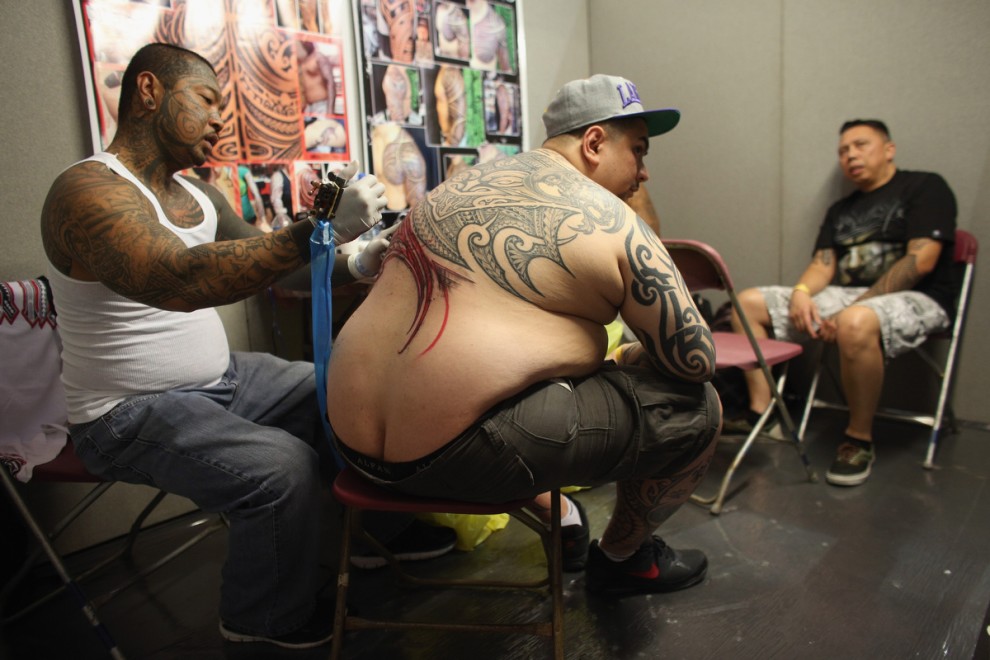 nervousness were talking with the tattooist and watching while other clients were serviced.

Tattooing also entails the violation of significant norms governing the interaction between strangers. There are few settings in everyday life in which extensive physical contact, the willful infliction of pain, and exposure of intimate parts of the body to virtual strangers are routine aspects of commercial interactions. Since the tattoo studio is largely a male domain and most tattooists are men, body exposure and intimate touch were factors of physiological risk about which women tattooees expressed concern with conSiderable regularity.

The nebulous and largely incorrect information about tattooing that circulates within conventional social networks contains cautions about physiological risks tattooees may well encounter. Warnings that one Is apt to contract hepatitis, AIDS, herpes, or other diseases from tattooing; that Infection is common; and that people often have negative physical reactions to the tattoo pigments are typically presented as signtftcant risk factors. Most tattoo artists are overtly aware of. and take great pains to aVOid. these potentially negative consequences. The majority of studios are kept scrupulously clean. eqUipment is autoclaved or kept in antibacterial solutions, tattoo needles are used on only one client, unused pigments are discarded, and customers are given written Instructions on the steps which should be taken in order to insure that the tattoo heals properly. Most tattooees are impressed by the apparent cleanliness of the modern tattoo studio. They are generally careful to follow the aftercare instructions provided (we will see later in this chapter that tattooists negatively define those clients who disregard the basic rules about how to care for a new tattoo). The symbolic hygiene of the tattoo establishment and the tattooist's ritual display of competence are effective in reducing this aspect of the client's risk experience.

Even when he or she chooses a small design, the tattoo client, armed with minimal information, encounters an unanticipatedly high «financial risk.» Confronted by this risk, the tattooee may attempt to bargain for a lower practice that is, as presented in the last chapter, not acceptable in most commercial tattoo studios. Discounts are given only to steady customers with whom the tattooist has a friendly relationship or, less frequently, when business is slow and the tattooist is desperate to have, at least, some income for the day. The following excerpt from my fieldnotes describes a typical encounter with a customer who attempted to reduce his financial risk.

When confronted with the «sticker shock» generated by the prices posted on the flash lor, in the case of those requesting custom work. hearing about the estimated length of time the tattoo will take and the artist's hourly rate). inexperienced tattooees usually either swallow hard and pay the money up front or they reduce their risk by revising their expectations and picking a smaller and less expensive design. It is interesting that tattoo selection on the basis common approach when a consumer is making an impulse or «low involvement» so common in what should be. by all rights. a «high involvement» transaction.

The tattoo process than most novice clients anticipate. Typically, tattoo artists are reluctant to make appointments. Except in the case of complicated custom work. tattooists usually work on a basis. The novice tattooee. therefore, often confronts the problem of «time loss» (Roselius. 1971) as an aspect of risk. Except for pushyclient attempts to negotiate cost. dissatisfaction about waiting and arguments about were the most common sources of conflict within the tattoo settings observed. While commercial tattooists commonly see the rather languidpace of the shop as a mark of professionalism and artistry (only tattooists who are «only into it for the money» or who are technically unskllled rush the tattooing process), customers are often not as casual about the whole thing. Clients typically enter the tattoo establishment desire to undergo what they anxiously anticipate to be a painful experience. Waiting for long periods of time or being told to «come back tomorrow when we open» have the potential of precipitating sign1f1cant conflict.

Proprietors typically provide at least some minimal forms of diversion for waiting customers. Most provide waiting areas in which the client can leaf through magaZines or look at photo albums containing examples of their finest work. Other establishments have amusement arcades containing electronic games, pinball machines, and pool tables on which clients can wile away the hours. Usually, inexperienced clients use some of this time to increase their knowledge of the tattoo process. They watch as the tattooist readies his or her work space, adjusts the machines, chooses and dispenses the pigments, prepares the skin surface, applies the design, and inscribes the tattoo.  For some, this helps to reduce anxiety; others are made even more nervous by their first direct encounter with what tattooing actually entails. 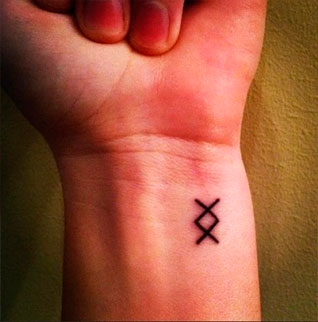 Tattoo clients are also concerned with the «social risk» they run when they deCide to have their bodies indelibly marked. While, as we have seen, various subcultures positively value tattooing as a symbol of commitm~nt and belonging, the tattoo is still defined as a stigmatizing mark by most members of mainstream SOCiety. The consumer is aware of the potential negative social consequences of being tattooed. Employers, parents, and other representatives of «straight» society are justifiably seen as interpreting the tattoo as a symbol of the general deviance and untrustworthiness of the wearer. The major way in which the novice deals with the potential social risk of tattoo possession is by limiting his or her commitment. The first tattoo is usually small, relatively inexpensive, and placed on a body location which is easily hidden from strangers or casual associates. Choice of a small tattoo placed on a readily concealable body location acts to decrease the potential negative social consequences of tattoo possession. In addition, since the small design is inexpensive. financial risk is minimized and. because a small tattoo is qUickly applied. physiological risk is minimized as well.

Positive social responses from friends and other members of the novice tattooee's reference group also help decrease feelings of social risk, As described earlier. getting tattooed is a highly social experience for most tattoo recipients. Most initiates enter the studio in the company of close associates who act as «purchase pals» (Bell. 1967). These companions help generally to reduce the risks involved by consulting with the tattooee about design and location. providing social support for the decision, commiserating during the painful application process. and by helping to fill waiting time. Purchase pals also aid the recipient by acting as surrogate social evaluators. They provide support by positively reacting to and thereby validating the tattoo consumer's decision.

While a certain level of risk is characteristic of all service interactions. it is particularly intense in settings where marginal or deviant services (for example. illegal abortion. prostitution, tattOOing) are produced an.

As a type of marginal service interaction the purchase of a tattoo entails conSiderable risk. Lack of familiarity with the purchase setting. anticipation of pain. uncertainty about social consequences. unanticipated expense. and other unknown factors lead the client to experience a high degree of risk.

The tattoo consumer uses a variety of strategies to help reduce his or her experience of risk in the tattoo encounter. In particular. the tattooee uses information prOVided by characteristics of the setting and the interaction within it to ease feelings of anxiety. The cleanliness and order of the studio, the quality and variety of the flash, the appearance and demeanor of fellow customers, and photos of past work are important sources of information. The customer's interaction with the tattooist is of particular importance, since this is the primary source of the information he or she uses to calculate trust.

The literature on patient satisfaction with medical service clearly shows that the client's evaluation of the service is, to a major extent, shaped by his or her interactional experience with and relationship to the service deliverer. The tattooee's experience of risk in the tattoo shop and satisfaction depend largely upon the psychosocial care provided by the tattooist. Interviewees consistently stated that those tattooists who were friendly, answered their questions patiently, allowed them to playa significant role in planning the tattoo, and behaved in what was often referred to as a «professional» style eased their anxieties and created a tattoo that was a significant source of pride. The key importance of the tattooist's demeanor is especially apparent in these descriptions prOVided by two women interviewees.

It is uncommon for tattooees to express dissatisfaction with being tattooed per se. Those that do tend to focus on the inferior craftsmanship of the service they receive. Concern with inferior quality is most commonly exhibited by more heavily tattooed people who have sufficient experience to evaluate the technical merits of their collection.