Because direct interaction with a client is central to service work

Because direct interaction with a client is central to service work, this relationship is, as discussed above, a major source of satisfaction and. as will be emphasized further in the following chapter, a generator of occupational problems. A variety of studies of client work involVing the sale of artistic skills or products with artistic features demonstrate that arts/crafts workers frequently have a rather negative view of their clientele/

The problems tattooists experience in their interaction with clients stem from a variety of sources. sensitivity to pain. fainting and other untoward reactions to the tattooing process, and inferior skin quality, due to factors that are not under the voluntary control of the client (these problematic characteristics and the tactics employed by tattooists to deal with them will be discussed in the following chapter). Because they are not deemed to be the client's responsibility,

Tattooists. as we will see, simply attempt to do the best they can. They try to provide the best service possible by working around these problems or by being prepared to deal directly with them should they arise. The client problems that are most troublesome for and annoying to tattooists are those over which the customers can exercise overt control. Clients who choose to be disrespectful of the tattooist's expertise, refuse to abide by the rules of the house, are obviously intoxicated or high on drugs. or who do not display a minimal level of care for their personal hygiene are the source of the major problems tattooists encounter in their occupational lives.

Like many workers who provide an expert service, tattooists chafe under the problem of haVing to deal with clients who are ignorant but demanding and who evidence little respect for their skills. One tattooist became quite agitated when he spoke of a particularly pushy and critical client who was seen as haVing attacked his artistic skills expertise. 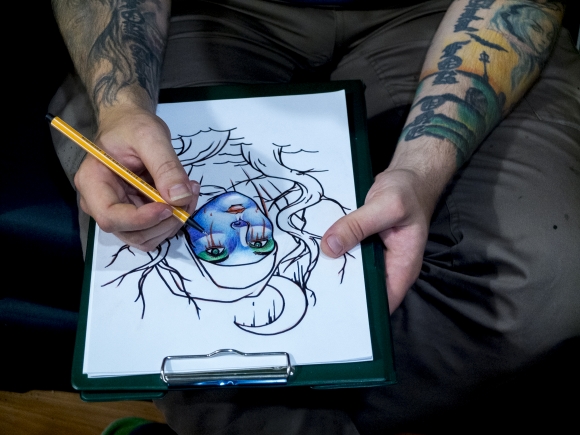 You have these morons who have absolutely no idea of what is artistic … to have them sitting there telling you how things ought to be done…. Nothing galls me more than to be putting a piece on and have them look at it and say, «That's enough shading:' I've done years in art school. If it shouldn't really be that way I wouldn't have been doing it that way. One kid came in last weekend and wanted a Tasmanian devil. and when you reduced it it didn't look right. So I added some shading to give it this three dimensional look. There's nothing like haVing kid standing there and saying, „Well, should this really be there?“ Of course it should be there. fool!

Another tattooist expressed his annoyance for problematic customers who displayed disrespect for his other clients, as well as the physical setting, and his own authority.

(I have problems with) people who come in and are really belligerent. They don't respect. first of all. the situation … the situation being the front of the studio. being the open area where people can move in and out freely. The books areavailable to them … it's a public area. But that public area should also be respected. So that putting your cigarettes out on the rug, coming in and eating a sandwich and throwing your shit on the floor, spilling don't tolerate that, But I don't go out there and just throw them out. I come out and remind them that this is the situation that you're in. Don't throw your shit around, don't put your cigarettes out on the floor. Act like a decent person here.

Don't be hassling the other customers. Sometimes I have guys and there will be a girl in there and they will be all over her. „Hey baby, you going to get a tattoo on your tits?“ Then I have to go out there and lay down the law. The law is that this is an opportunity for you to express yourself in terms of a visual form. I would be glad to help you do that. But if you want to come in here and hassle people and don't know how to behave socially in this context, then you are going to have to leave. That's it. So then if they come up to me and they say, „Well, I want you to do this.“ I say, „Look at the designs, take your time, think about what you want to do.“ „Well, I don't care, man. Get this guy out of here and take care of me.“ That kind of belligerent stuff. I just tell them, „Look, I'm not going to tattoo you. I don't have to deal with you. Go someplace else.“ So I just nix it off before it even gets started. Although I have been caught up in situations where people have gotten to the next stage which is getting through (the next) door. I have thrown people out of here for not stopping at that door. That's the portal; the territorial limit. 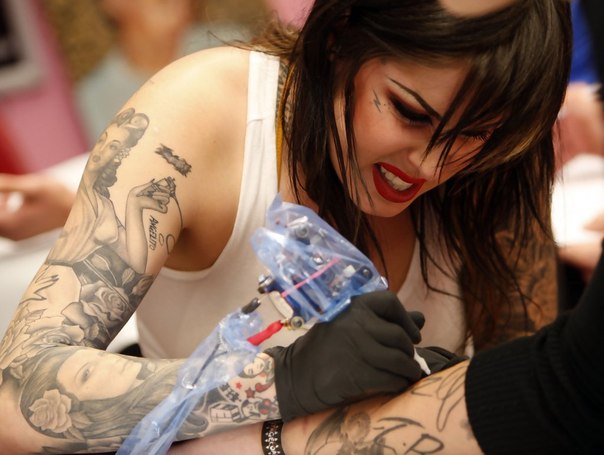 Clients who enter the tattoo establishment while intOXicated or stoned also violate the practical rules imposed by the tattooist and are defined as problematic. Not only do these customers tend to be belligerent and disrespectful, but they also are difficult to tattoo because of their inab1l1ty to maintain the „appropriate receiving demeanor“ demanded by tattooists. They move about, talk incessantly, jerk away in reaction to pain, spew vomit on the tattooist and his or her eqUipment, and generally make the tattooist's work more difficult and unpleasant.

There is a common perception among the general public that many of the people who receive tattoos do so because they are drunk and pressured into it by similarly intoxicated associates. Actually, most tattooists are extremely careful to avoid working on people who are obViously under the influence of alcohol (or other drugs). Drunken clients tend to generate conflict in the shop, and tattooists are aware that tattooing someone who is not entirely free to choose the procedure has the potential for causing trouble. In a business that continues to labor under the reputation of being on the margins of respectability, at best, this is to be avoided. Most shops have a prominently located sign that states the cardinal rules of the IN CASH, NO TATTOOING OF DRUNKS OR MINORS:' While most intOXicated clients use alcohol as an analgesic in anticipation of a painful process rather than a deinhibiting motivator,they are roundly disliked by tattooists and are often the object of humorous disdain. The following exchange is drawn from my fieldnotes:

[Quote from fieldnotesl the artists get into talking about how hard it is to work on drunks. fuckers come in here drunk and they're no good at all. You can't get them to stay still. They just keep on falling over. I was working down in Georgia this guy came in real drunk and wanted a pattern put on. I got him shaved and put the stencil on and the guy got up, looked at it in the mirror, paid his forty bucks and left. (Laughter.)  other day I was working on this guy and he was drinking soda. But he was getting had booze in the can. Finally he started to fall of the stool and his brother had to come over and we leaned him up against the wall. His brother was real pissed. Apologized all over the place.

Some clients are defined as troublesome because they do not exercise an acceptable level of care over their personal hygiene. Working in close physical proximity with the client's body, the tattooist demands a certain minimal degree of cleanliness. Finally, customers who shop for tattoos solely on the basis of price („What can I get for $25?“), complain about the cost of the piece they select, or attempt to bargain with the tattooist for a lower price are also negatively defined. These clients are seen as not being respectful of the tattooist's expertise or as not displaying sufficient commitment to tattooing