Pitfalls and Recommendations in Cases of Laser Removal

IMPORTANCE Pigmented lesions in decorative tattoos cause diagnostic difficulties at a clinical and dermoscopic level. In cases of laser removal of tattoos, hidden suspicious nevi may be revealed gradually.

OBSERVATIONS We describe the first case of a malignant melanoma that developed on a preexisting nevus within a tattoo during and between the phases of laser removal. The patient refused to undergo excision of the nevus until we made excision conditional for continued laser treatment.

CONCLUSIONS AND RELEVANCE The English literature reports 16 cases of malignant melanoma developing in tattoos. Correlation between the placement of tattoos and the development of malignant melanoma remains unclear. Our case emphasizes the diagnostic problems of pigmented lesions within tattoos. For safety reasons, tattoos should never be placed on pigmented lesions; if they are, the tattoos should not undergo laser treatment. We suggest an excision before starting laser tattoo removal. Dermoscopic assessments on a regular basis during the period of tattoo removal are recommended. JAMA Dermatol. 2013;149(9):1087−1089. doi:10.1001/jamadermatol.2013.4901 Published online July 31, 2013

The number of decorative tattoos has been increasing, as has the demand for their removal by laser devices. Traumatic events, such as UV and ionizing radiation, mechanical trauma, persistent inflammatory reactions, and burning, have been discussed as cofactors for neoplasm.1,2 Only 16 cases in the English literature document malignant melanoma developing in tattoos.3−5 We herein describe a malignant melanoma that developed on a nevus within a tattoo that had undergone removal by laser.

Report of a Case A white man aged 29 years presented to our clinic for the first time in 2001 to have his decorative tattoos removed by laser. The large multicolored tattoos on both arms and his chest had been applied approximately 10 years earlier (Figure 1). After detailed informed consent, we started tattoo removal in March of 2002 using Nd:YAG laser (Affinity QS; Cynosure) set to a wavelength of 1064 nm to treat black ink and 532 nm to treat red and orange dye. We started with 1.0 J/cm2 , and in the course of the treatment we increased energy up to 7.1 J/cm2 for the 1064−nm wavelength (spot size, 4 mm) and 1.5 J/cm2 for the 532−nm wavelength (spot size, 6 mm). 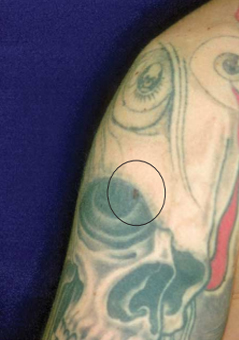 Owing to the extreme size of the tattoo, only partial treatment could be applied during each session. Because of a loss of response after 43 sessions, we started using alexandrite laser (Accolade; Cynosure). The energy was increased from 4.0 to 4.8 J/cm2 with a spot size of 4 mm. Before laser treatment, we assessed the patient’s skin and noticed a nevus on his right shoulder. Because the nevus was situated within the laser area, we strongly advised him to have it excised. Possible changes within the nevus were barely detectable because of the intracutaneous black tattoo pigments in the area. Initial dermoscopy findings showed no atypical signs. The patient strictly refused exc ision. We repeated our explic it request for him to have this nevus removed several times, and he rejected each request. In November of 2009, after a total of 47 laser sessions, we informed the patient that we would not continue laser treatment because of forensic reasons, and he agreed to have the nevus excised (Figure 2). At that time, dermoscopy findings showed characteristics of an early melanoma. The excisional biopsy results showed the lesion to be a Clark level II superficial spreading malignant melanoma with a Breslow thickness of 0.45 mm (Figure 3). Chest radiography and lymph node ultrasonography yielded no abnormalities. The patient refused a second excision with a free margin. 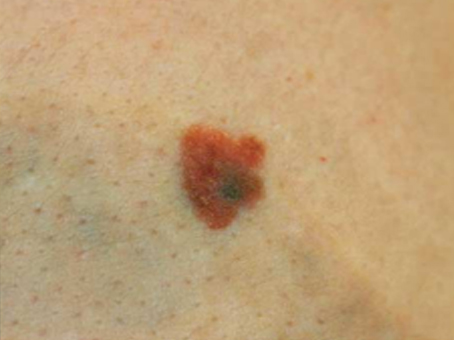 Discussion Before laser tattoo removal, skin should be examined as thoroughly as possible for hidden pigmented lesions. In cases of nonadherence to medical advice (as discussed herein), laser treatment should be withheld until the recommended excision has taken place. Suspicious nevi can be covered by tattoos, and assessing the nevi is extremely difficult at the clinical and dermoscopic levels.6 Tattooing also causes difficulties in assessing a sentinel lymph node biopsy specimen because the pigment can mimic metastatic disease and thus provide a challenge for surgeons and pathologists.7 We recommend dermoscopic assessments on a regular basis while a tattoo is undergoing removal by laser. For this reason, laser removal of tattoos should be performed by dermatologists and not by nonprofessionals.8

Pigmented lesions should not be treated by laser because of forensic considerations and to prevent potential laserinduced changes. In 2004, Kerl et al9 published a tale of caution concerning laser therapy and melanocytic nevi and emphasized that, for most melanocytic lesions, laser therapy is not appropriate.9 No scientific evidence suggests that laser treatment converts benign nevi into melanoma, and we will never know if the nevus in our case would have progressed the same way with or without laser treatment. In the course laser treatment, pigmented cells can lose pigmentation, thus making assessment of melanocytic lesions more difficult.

Kopera et al10 already described the pitfalls of treating melanocytic lesions by laser: cells persisted ex vivo throughout a single course ruby laser exposure. In 2000, Kaskel et al11evaluated the relationship between traumatic events (eg, applying or removing a tattoo) and melanoma characteristics by means of a retrospective questionnaire addressed to 369 patients with melanoma. The authors found no evidence that traumatic events are a causative factor for melanoma formation.11 Tattoo removal with laser therapy also releases potentially toxic substances, such as dibutyl phthalate in black ink, with unknown consequences.5,12 Gottschaller et al13 presume that the main danger of treating a pigmented lesion by laser is a clinical misdiagnosis, whether the lesion was a primary malignant melanoma or whether a malignant melanoma was induced by the laser treatment. In 2010, Zipser et al14discussed the outcomes of 12 patients presentingwithmelanoma subsequent to previous treatment with laser.

They found that treating pigmented lesions with a laser delays the diagnosis of melanoma and thus prevents the timely beginning of the necessary therapy. The authors suggest that laser treatment of melanocytic nevi is often based on a clinical or histological misdiagnosis and that more unreported cases exist. They also raise the question of the possibility of melanoma induction by laser. Lee and Busam15 emphasize the importance of dermoscopy and, if necessary, performing appropriate biopsies before laser treatment. With these aspects in mind, we would make a different decision in the future and exclude pigmented lesions within tattoos from laser treatment in general. In the present case, we want to emphasize the diagnostic problems of pigmented lesions within tattoos and the danger

ARTICLE INFORMATION Accepted for Publication: April 4, 2013. Published Online: July 31, 2013. doi:10.1001/jamadermatol.2013.4901. Author Contributions: All authors had full access to all the data in the study and take responsibility for the integrity of the data and the accuracy of the data analysis. Study concept and design: All authors. Acquisition of data: Pohl. Analysis and interpretation of data: Raulin. Drafting of the manuscript: Pohl. Critical revision of the manuscript for important intellectual content: All authors. Statistical analysis: Raulin. Administrative, technical, or material support: All authors. Study supervision: Raulin. Conflict of Interest Disclosures: None reported. Additional Contributions: Markus Hantschke, MD, Dermatopathologie Friedrichshafen, Germany, provided the image used in Figure 3.