The ancient tribal groups inhabiting the British Isles practiced extensive tattооing. The Picts were named for the iron implements they used to create tattoo designs; the term «Briton» is derived from a Breton word meaning «painted in various colors». Briton males were heavily decorated with animal designs intended to enhance their fearsome appearance. In his memoirs Julius Caesar noted that the Britons were colored blue and carried designs that made them «frightful to look upon in battle» 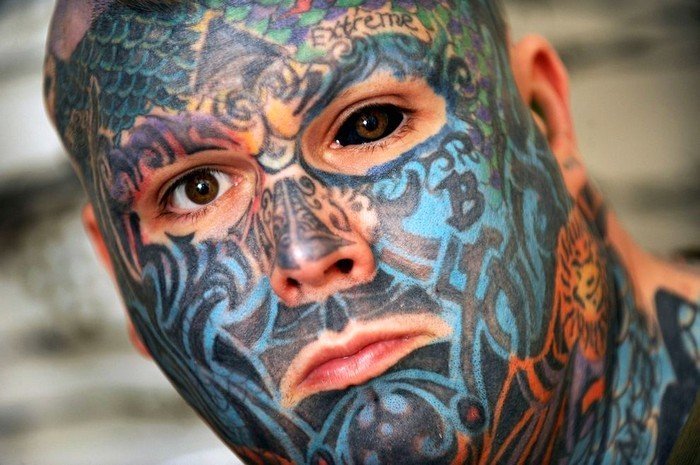 This contact with invading Roman legions resulted in the adoption of tattooing by the occupying Roman soldiers. The practice became popular and continued to spread within the military until it was banned in the third century by the Christian Emperor Constantine who maintained that it violated God's handiwork. Centuries later continued to practice this ancient form of decoration as members of the nobility bore tattoos that, most commonly, displayed pledges of devotion to loved ones or had religious significance.

FolloWing the Battle of Hastings, King Harold's mutilated body was identifiable only because he had «Edith» tattooed over his heart. From the eighth through the tenth centuries, western tattooing was again banned by the Church as a form of deviltry and because it disfigured the body created in God's image. During the campaigns to wrest control of the Holy Land from the Muslims, tattooing again became a frequent practice as crusaders had themselves marked with thecrucifix or other religious images to insure a Christian burial should they die in a foreign land. Until the eighteenth century this form of religious tattooing was the only significant practice responsible for retaining tattooing within western culture. Tattooists in Jerusalem did a lively business among pilgrims who received religious images commemorating their journey and indicating their devotion to God. This practice continues to this day. The modern history of westernlEuropean tattooing begins with the exploratory voyages of Captain James Cook and his encounters with tribal tattooing in the South Pacific. In July of 1769

Cook noted in the ship's journal:

Men and women [of Tahiti) paint their bodies. In their language. this is known They inject a black colour under their skin. leaving a permanent trace…. figures of men. birds or dogs; the women generally have the figure Z simply on every joint of their fingers or toes. The men have it likewise and both have other figures such as circles. crescents. etc. which they have on their arms and legs. In short. they are so various in the application of these figures that both the quantity and situation of them seem to depend entirely upon the humour of each individual. Yet all agree in having all their buttocks covered with a deep black. over this most have arches drawn one over another as high as their short ribs which are near a quarter of an inch broad. These arches seem to be their great pride as both men and women show them with great pleasure 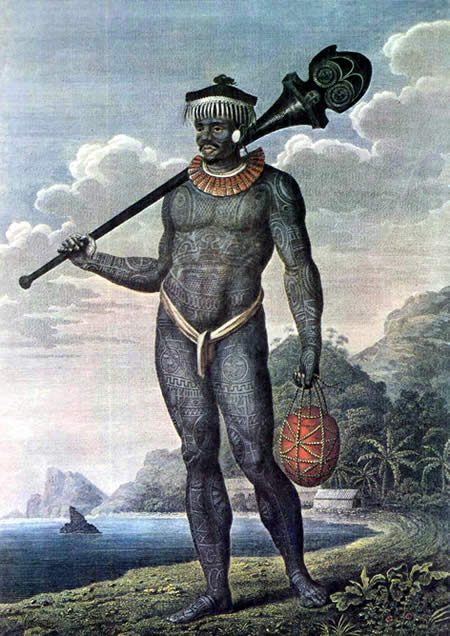 Prior to this encounter with tattooing. the practice was called «pricking» in the west. Cook introduced the Tahitian meaning «to strike» or «to mark» and soon «tattoo» became the common term.

Officers and sailors of the Endeavor received tattoos from Tahitian artisans to commemorate their adventures and. on his second voyage to the Pacific. Captain Cook returned to England witha heavily tattooed Tahitian prince named Omai who was exhibited as an object of great curiosity to members of the British upper class. Omai was one of the first of a series of tattooed people on display in western aristocratic circles at the end of the eighteenth century. The first tattooed European to be publicly exhibited was Jean Baptist Cabri, a French sailor who had jumped ship in the Marquesas in 1795 and was, according to his account, adopted by a tribe and tattooed on the face and body as a mark of honor. A few years later an Englishman named John Rutherford returned from a voyage to New Zealand. He told of being captured by the Maoris, forcibly tattooed, and compelled to marry a chieftain's daughter. After five years Rutherford escaped and returned to London where, in the early nineteenth century. he became the object of great public interest.

By the 1850s a number of heavily tattooed Europeans were making a liVing by exhibiting themselves to the public and to meetings of prestigious medical associations. Their often fanciful in the popular well as contact Japan was opened to western merchants a lively tattoo fad in Europe by the late nineteenth century. For the most part. the European was not affected by the «tattoo rage» as it was dubbed by the press. The most avid tattoo consumers were sailors, craftsmen. the military. and members of the aristocracy.

The most popular designs were South Sea and nautical images, identification marks (especially military and craft guild insignia). religious tattoos, marks of political allegiance, and love vows. It was the tattooing of the nobility, who commonly were tattooed in the course of travels in the orient. that drew the most public attention. Led by the London World. newspapers of the day carried lurid accounts of aristocrats' tattoo experiences. Among the famous tattooed personages were Czar Nicholas II of Russia, King George of Greece. King Oscar of Sweden. Kaiser Wilhelm of Germany. and most of the male members of the British royal familySoon the tattoo rage made its way across the Atlantic and began to affect the rich and powerful in America. 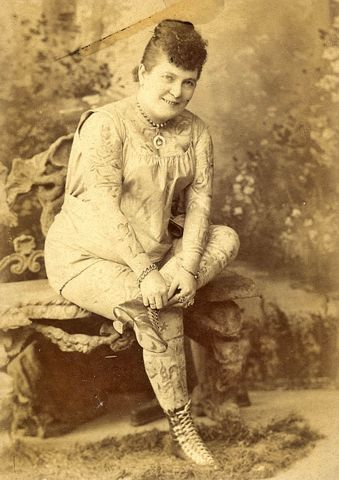 The first professional tattooist to practice in the United States was Martin Hildebrand. He claimed to have «marked thousands of soldiers and sailors» while travell1ng among both the Confederate and Union forces during the Civil war. By the 1890s Hildebrand had opened an atelier on Oak Street in New York and was continuing to ply his trade. Other American artists practicing during this period in the Chatham Square area of New York were Samuel F. O'Re1lly, «Professor» Charlie Wagner, Jack Hanley («The World Famous Artist»), and Lewis Alberts. For the most part, the Bowery tattooists and their colleagues in other East Coast cities lacked formal artistic training and were, at best, only moderately talented. They devoted themselves to inscribing crude, marks on largely patrons who populated the bars, pool halls, and barbershops located in rundown urban areas. For a brief time in the 1890s the Japanese master Hori Chyo was enticed by a $12,000 a year offer from a New York millionaire to practice in America and two other Japanese tattoo artists were brought to New York under the sponsorship of Samuel O'Re1lly

Samuel O'Re1lly's place in tattoo history was assured by the major part he played in the development of the electric tattoo machine. This technological innovation was significant because it increased the rate at which tattooing diffused in the SOCiety. Tattooing with the electric machine subjected the customer to less pain and necessitated far less skill and experience on the part of the tattooist. Consequently, the number of tattoo practitioners and clients increased dramatically during this period.

In 1876 Thomas Alva Edison patented an electric stencil pen device for making punctures on paper patterns used in sign painting and embroidery. Fifteen years later O'Reilly received the first American patent for an electromagnetic tattoo machine (which he called the «tattaugraph») which was, with only minor modifications, adapted from the Edison design. In 1904 Charlie Wagner was awarded a patent for a significantly improved tattoo machine with two electromagnetic coils set transversely to the tube and needle assembly rather than the rotating coil design of the O'Reilly instrument.

O'Reilly's colleague Lew Alberts, who was originally a wallpaper designer, became a prolific creator of tattoo patterns. His work is of particular importance to the course of western tattooing because he reproduced sheets of his designs and sold them to fellow tattooists. A large percentage of the highly conventionalized tattoo designs found on the wall «flash» of contemporary tattoo shops originated in the design charts created in the late nineteenth century.

Prompted by the overt distaste expressed by members of the American elite. media stories of venereal diseases contracted in unhygenic tattoo establishments. and the increased popularity of tattooing within socially marginal subcultures. tattooing fell into disrepute in the United States by the 1920s. Additionally. it came to be seen as a deviant practice because heavily tattooed men and women were commonly exhibited as curiosities in circuses and sideshows. P. T. Barnam displayed tattooed dwarfs. tattooed wrestlers. tattooed ladies. and entire tattooed families (most notably Frank and Annie Howard). The Depression spurred this definition of the as unemployed men and women became heavily tattooed in order to find some means of earning a liVing